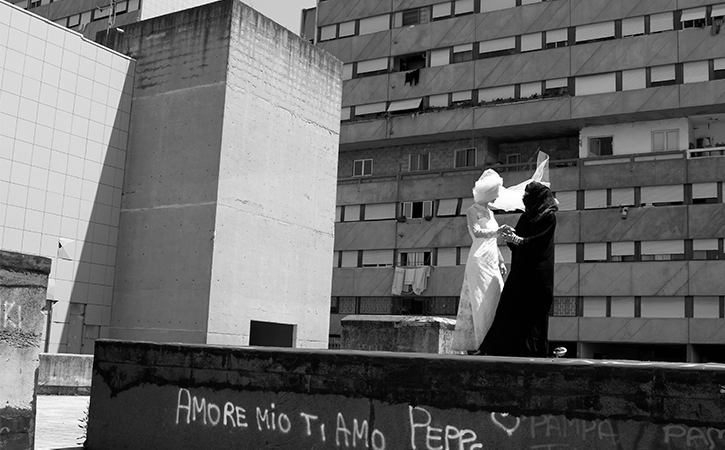 Today the Edinburgh International Film Festival announces that FUTURE MY LOVE, written and directed by first time feature filmmaker Maja Borg is nominated for this year’s prestigious Michael Powell Award. Produced by the Scottish Documentary Institute (SDI Productions Ltd), Edinburgh, with Lisbet Gabrielsson Film, Sweden, and supported by Creative Scotland, Swedish Film Institute, and SVT, Future My Love is a unique love story challenging our collective and personal utopias in search of freedom and will celebrate its World Premiere on Thursday 21st June.

At the brink of losing the idealist love of her life, filmmaker Maja Borg takes us on a poetic road trip through the financial collapse, exploring a radically different economic and social model proposed by 95-year-old futurist Jacque Fresco. Future My Love challenges us to understand why we resist change as individuals and as a society – when we both can and have to.

“The free market is a failed utopia but we choose to stay,” says Maja Borg. “Like in an abusive relationship, we have lost our confidence to live without it. To challenge economy is to challenge ourselves, which is far harder than to complain about the banking system.” Carefully weaving a texture of archive footage, black and white Super 8 film, and colour HD, Borg poignantly depicts the universal struggle between our heads and hearts in times of radical change.

Named in homage to one of Britain’s most original filmmakers and inaugurated in 1993, the Michael Powell Award rewards imagination and creativity in British filmmaking. 2009 saw Duncan Jones win The Michael Powell Award for Moon, and Nick Whitfield’s dark comedy Skeletons won in 2010. All films in competition are also eligible for the ‘Best Performance Award’ in a British film.

The World Premiere of Future My Love takes place on Thursday 21st June 6.05pm at Cineworld 8 and will be followed by a special launch party on Wednesday 27th June 8pm at The Liquid Room, featuring a 90-minute concert by The New Tango Orquesta from the film’s unique soundtrack.

Director Maja Borg said: “I am so glad to premiere my first feature film at EIFF after such a long and intense production, and I’m extremely happy it has been recognised to be in competition for such a prestigious prize as the Michael Powell Award. I have truly lived with this film for the last five years and so have the people closest to me. Without their support and direct involvement, the openness and honesty of my characters, together with the incredible talent of my crew, this film would literally not have been possible.”

Producer Sonja Henrici said: “I’m very excited to present Future My Love, made by a nearly all-female crew at this year’s Edinburgh International Film Festival. Ever since we started this film in 2007, we’ve been told how timely the subject is in relation to the economic meltdown. I believe Maja has made an incredibly brave and deep contribution on the subject of “economy.” We look forward to discussing the themes in the film – how we choose to relate to each other within this context – both as individuals and as a collective, given technology’s potential.”