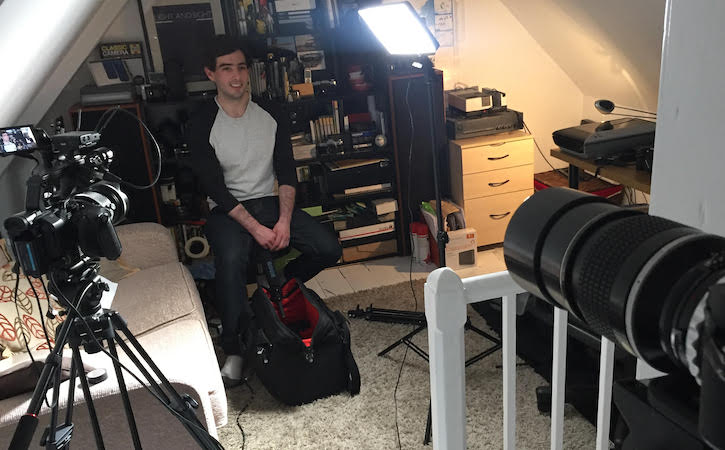 Are you an eyes or a teeth person? In Thomas Hogben’s short film, Teeth, he suggests that people either look at one or the other first, before explaining how his own teeth have had a major impact on his life.

Whether you have perfect pearly whites or find yourself visiting the dentist multiple times per year, the 10-minute film will make you think about your own relationship with your gnashers.

With the documentary now available to watch in full online, we wanted to know more about how Teeth came to be made as part of our Bridging the Gap scheme. Once you’ve watched Teeth, scroll down the page to read our interview with Thomas…

Thomas Hogben: It’s a short film that explores the relationship we have with our dental companions. It’s based around the impact my own teeth had on me and my life growing up, and it aims to drill down into our need to conform and our obsession with appearance in this age of the selfie.

What’s your background in documentary filmmaking?

I studied Photography, Film and Imaging at Edinburgh Napier University back in 2004. This really helped me to gain the practical film knowledge that I needed before I ventured out into the real world, and began to work on commercial projects across the UK.

But soon after I graduated I knew that documentary where was my heart really lay. There are just so many unique and exciting stories out there and if we don’t try to capture these, then who will?

I guess I’ve always had an interest in collecting things. Even as a kid I would hoard away what ever I could, and when my father introduced me to photography as a young lad I was immediately hooked. Photographing anything and everything to capture a record of the world around me.

From there one thing just lead to another and documentary filmmaking has given me an opportunity to take my obsession with capturing my world and bring that to telling others stories.

I heard about the scheme when they came to Inverness to screen the films as part of the BTG showcase at Eden Court. The quality of filmmaking really impressed me and I loved how they had developed such a diverse selection of films.

At the end of the screening Flore [Cosquer, SDI’s Head of Talent Development] asked if anyone had any ideas for a short film and we were able to shop around our ideas. I was expecting traditional Scottish stories, but in fact they were much more interested in pushing the boundaries of what a documentary could be… and with that I knew it was something I had to try and get involved with.

I’d already captured the time-lapse of my teeth straightening by this point, and knew there was a film around them I wanted to create, but I wasn’t sure what direction to take. Just having the opportunity to talk with other filmmakers that night about the project was the key starting point that helped me to bring my proposal together.

Did the proposal change significantly during the development process?

Yes, with the support of the SDI and the guest lecturers who were brought into the BTG program my film slowly grew and grew. And I think so did my ambition. I knew I wanted to speak to my own family about my troublesome teeth, but to have a leading anthropologist from the British Museum involved was something that I would never have been able to achieve without the guidance and support of the SDI (along with my producer!).

The core idea though stayed the same. But thats not to say that we didn’t explore other options. We looked at the film from many viewpoints and lots of different directions were proposed but this for me, was just the process that was needed to ensure that we were telling the story in the best way.

I think the biggest thing for my about the whole process was the impact that bringing on experienced people can have when you’re working on a film. Documentary can feel like a very solitary endeavour, especially when you’re in the film as well. But bringing on an experienced editor and producer gave me the freedom to see the film clearly without getting stuck in the technical details.

This is something I’ve taken with me for the rest of my documentary work, having a editor who can step back and look at the footage you actually have, rather than bring a vision of what you think you have captured, has really helped me.

What’s it been like seeing the reaction from audiences to the film?

The reaction has been fantastic. Its really daunting putting your film out there, regardless if its your story, or someone else has trusted you to tell theirs, that first screening just fills you with nerves. But it’s also really rewarding to see the audience engage with your story and that hopefully what you have made resonates with them a little, and they take something from the experience away with them when they leave.

For me, even the application process helped to firm up what had been bouncing around my head for months. There’s something really powerful about putting down your ideas onto a page. So even if you don’t feel like you’re ready to apply for BTG, I still think there is value in going through the process.

And you never know, with the support of the SDI your idea could be premiering at Edinburgh International Film Festival next year.

What’s next for you?

For me Bridging the Gap kickstarted a whole new level of projects. I’m working with fellow BTG alumni Kieran Hennigan on a second documentary for the BBC which should be out at the start of 2020. I’ve also just finished a one hour documentary called Eastbound, which follows Jenny Graham’s record breaking circumnavigation of the planet which premiers in November 2019.

In addition to this I’m working on a art film for exhibition in Japan in summer 2020 focused on the extraordinary talent of the glass sculptor Martin Janecky, which we are currently deep in production of.

To find out about booking a screening of Teeth, email alexandra@scotdoc.com.