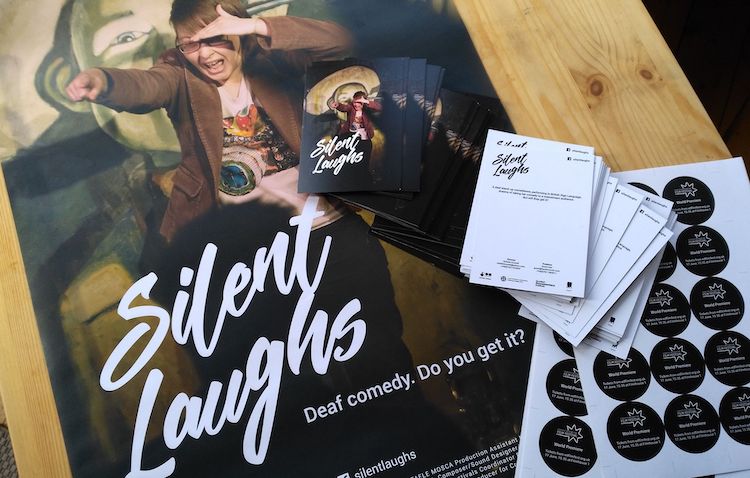 In Natalia Kouneli’s 2016 documentary short, Silent Laughs, we’re invited into the world of Leah, a Deaf stand-up comedienne performing in British Sign Language and fighting for her dream to bring Deaf Culture to mainstream audiences in a playful way.

An example of the varied output from our long-running Bridging the Gap talent initiative, which is currently open for applications, Silent Laughs follows Leah as she performs for this first time at Edinburgh’s Stand comedy club.

We present the film in full below, followed by a new interview with the director – just scroll down the page to read it.

SDI: What was your background in filmmaking before this project?

Natalia Kouneli: Before Bridging the Gap, I had experience mainly in post-production – I had worked in the role of editor in multiple factual content productions, although the vast majority of them were commercial.

I had some experience with filming equipment as well, as I had taken on some videographer roles in the past, but I had always been a lot more comfortable in the editing room. The one thing I had never really done was direct, and I was really excited to take the leap and try it in the ideal environment Bridging the Gap was offering.

How did Bridging the Gap come onto your radar?

I had just moved to Scotland and I met up with a cinematographer for coffee and tips on how to enter the local filmmaking scene. She mentioned Bridging the Gap within the first ten minutes of our conversation. I remember I Googled it right then and there and got excited that the keyword for that year was Women and terrified that the deadline was in five days!

What sort of help did you get through early BtG stages to refine your idea – were there any difficult or revelatory moments?

Grant and Virginia, the producer and editing consultant of Silent Laughs, have been immensely helpful in the journey of constructing the narrative arc of the film, which was basically non-existent before we started filming. At the beginning my idea was, “Let’s show the world how unique Leah and her comedy is”.

Grant and Virginia helped me see that that was not enough, there had to be a story. How would her character develop on screen during those ten minutes? At a certain point I started to panic but it was right then that Leah and I got the idea of trying to get her a gig at The Stand, one of the most popular comedy venues in Scotland. 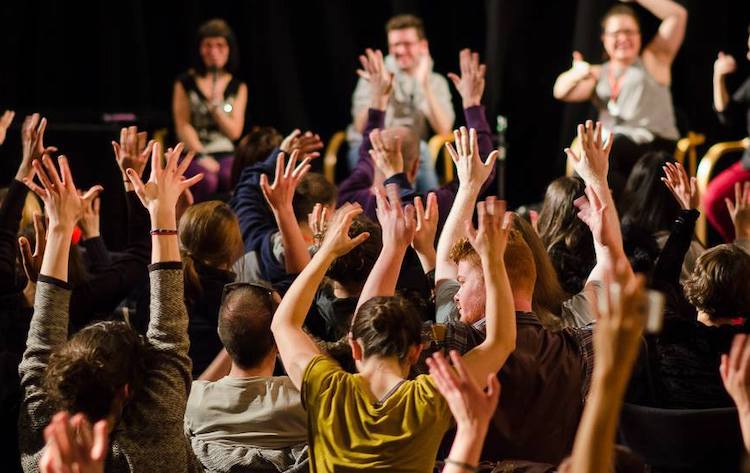 What was it like working so closely with Leah, being part of her life for a period of time?

Working with Leah was a unique experience, and the timing of that experience was almost surreal. I had known Leah since we were children in Greece, our parents met through our common hearing aid dispenser when I was three as I had just been diagnosed with moderately severe hearing loss and started using hearing aids. Leah and our families often met throughout our childhood until she left to study in the UK and we lost touch.

We reconnected when I moved to Edinburgh and I ended up getting an apartment in Leith right opposite hers and getting her to agree to film Silent Laughs, all within a month of seeing each other for the first time in 20 years! Leah and her partner opened their home to me and my husband Raffaele, who worked on the cinematography of the film and who has been extremely supportive throughout the production, and we all got really close during the filming process.

We definitely had our ups and downs under the stress of giving our best selves behind and in front of the camera and on stage, but overall it has been, I believe, a beautiful experience for all of us.

Was it ever overwhelming directing as well as looking after sound and editing?

Directing was definitely overwhelming. I’ve always felt really comfortable in the editing room as this is where I felt the most free to play with storytelling, away from the stress of the set, where you had to get the story and the frame and the lighting and the sound right within a very specific time frame involving multiple other people, so the filming process was quite stressful for me.

Editing my own film was overwhelming as well, as I was used to work with a director who already had a vision and my role as an editor was to make sure that vision was fulfilled so I didn’t have to take the lead and make decisions about everything. Having to edit while finding my own vision was probably the most overwhelming part of the experience. Virginia’s guidance during the editing process really helped me find and focus on that vision though. 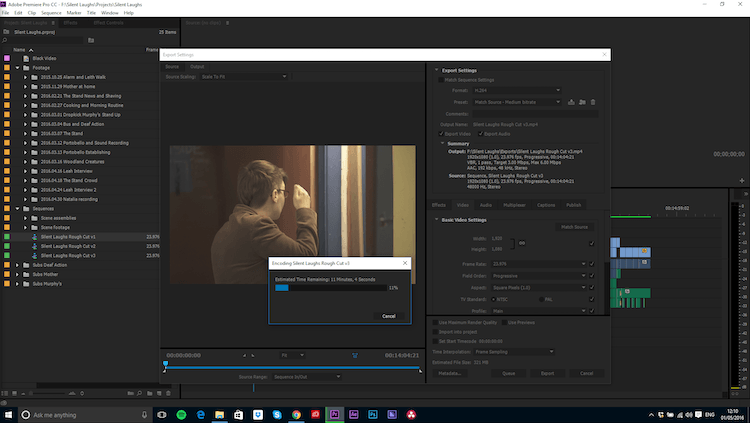 How were you supported through Bridging the Gap during post production and on release?

Virginia (editing consultant), Grant (producer), Flore, Sonja and Noe (SDI) have all been extremely supportive during the post-production of the documentary. There was a specific schedule with strict deadlines where we met and watched drafts of the edit together and that really helped structure the experience. The feedback I received during those meetings felt like going through one year of film school in a single afternoon. It was very intense and extremely constructive.

When Silent Laughs premiered at EIFF and was subsequently accepted to many other film festivals around the world (most of which either received a submission directly from SDI or already had some ties to it), it was truly an explosion of emotions.

What would your advice be to anyone thinking about applying for Bridging the Gap?

Make sure you have good access to your character/subject and that you spend time with them before even applying. I think part of what made our year’s films beautiful is that we all four had great access to our characters, they were all either family or close friends, and it really shows in the films. I feel that the intimacy between the filmmaker and the character can change the emotional energy of the film.

What are you currently working on?

I am currently going through a massive career change. After ten years of working as a video editor/motion designer, I decided to go back to school and study to be a hearing instrument specialist. I got the idea when I changed hearing care professional a few years ago after going to same person for 27 years and the experience just made me see the profession in a completely different light and that is what I saw myself doing a few years from now.

Sadly, working in post-production in the corporate world drained my creativity during the last few years and I haven’t been involved in the production of any documentaries ever since I made Silent Laughs. I can still feel the flame in me though – every time I read an interesting article I always catch myself thinking “How would that look on screen?”. I am hoping that walking away from the corporate world will help me find my creativity again and that I will work on more documentaries in the future.

To find out about booking a screening of Silent Laughs, email alexandra@scotdoc.com.