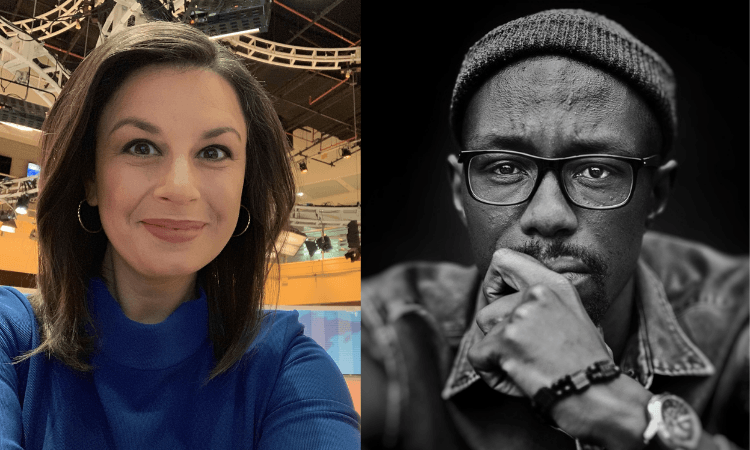 We’re thrilled to announce two new ambassadors to help us spread the word about SDI, to champion creative documentary and encourage more diversity in front of and behind the camera.

Halla Mohieddeen is a Principal Presenter with Al Jazeera in Doha. Before moving back into 24-hour international news, she launched STV News Tonight, bringing local, national and international news to a Scottish audience, and Outwith, a podcast discussing stories and issues that seldom make it into news bulletins. She has a wealth of international experience, working as a journalist and presenter in Asia, the Middle East, mainland Europe and Scotland.

Halla is particularly pleased to support SDI’s 50/50+ Women Direct campaign: “I know from experience how vital it is to have diversity in front of and behind the camera. If we’re to do justice to the world we live in, it can’t just be a small section of society that tells our stories.”

Stewart Kyasimire is a BAFTA-nominated director whose films include BBC Scotland’s Black and Scottish, a seminal, identity-defining film gathering together prominent black Scots from all generations. Bash the Entertainer – Behind the Smile is Stewart’s next documentary for BBC Scotland tackling social media, racism and mental health.

In 2019 Stewart set up the first BAME production company in Scotland, after noticing the lack of diversity and inclusion within the film and TV industry on and off-screen. His company ‘Create Anything’ has set out to tell minority ethnic stories. Create Anything set up a BAME Scotland network agency placing the right talent in front of Execs and commissioners.

Noe Mendelle, SDI Director, says: “I’m delighted to welcome Halla and Stewart as SDI ambassadors. Both are great influencers and deserve the respect they have from their followers. Halla and Stewart have large, generous Scottish personalities, keen supporters to female filmmakers and active promoters of diverse voices. Over the next few years, they will be great cultural anchors to the activities and campaigns run by SDI.”