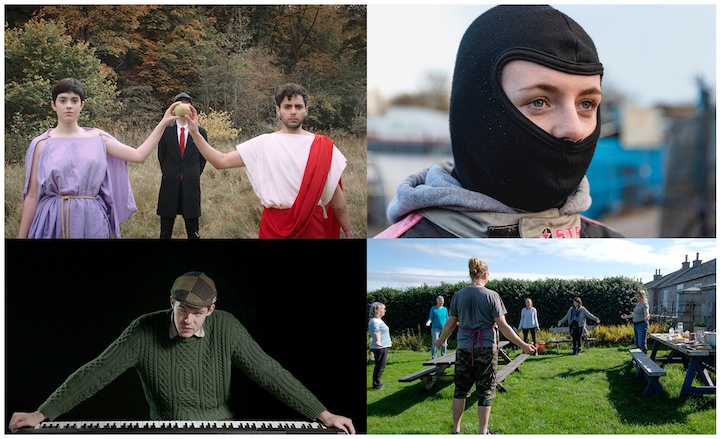 This month sees the premiere of four new Bridging the Gap documentary shorts at Glasgow Film Festival, each one responding to the theme of Turbulence.

Although the films – Giulia Candussi’s Against the Tide, Jack Goessens’ Everyman, Patrick Steel’s Racing Stock and Austen McCowan & Will Hewitt’s Harmonic Spectrum – were commissioned in January 2020, their production was postponed due to the Covid-19 pandemic and their release has been eagerly anticipated by the filmmakers and their participants.

The films will premiere at Glasgow Film Festival on Friday 26th February and will be available to stream until Monday 1st March – join us on Tuesday 23rd March for an SDI Coffee Morning with the filmmakers!

In Giulia Candussi’s Against the Tide, a small community on a remote Scottish island lives in deep connection with the land and the weather. This film follows a woman, Gill, during the final stages of her trial period. Will she be accepted and become a full-time member of the community?

Jack Goessens’ Everyman is a personal, visual essay about gender transition – focusing on the social context and implications and exploring how the world is different living as female compared to being perceived as male. Jack tells his story by using and reframing gender focused tropes and imagery from popular culture, mythology, history and art.

Patrick Steel’s Racing Stock introduces us to 15-year-old Taylor Borthwick, a stock car racer like her father and her grandfather before her. As she turns 16 she will move into the adult leagues, racing bigger, faster cars against men twice her age. It’s a dangerous sport: does she have what it takes?

In Austen McCowan & Will Hewitt’s Harmonic Spectrum, Sean uses the Piano to navigate life on the Autistic Spectrum. As he is drawn into new musical collaborations he must learn to balance his enthusiasm and compulsive energy with understanding and compromise, redefining his perspective in the process.

To arrange a screening of any of the films please email Alex via festivals@scotdoc.com.