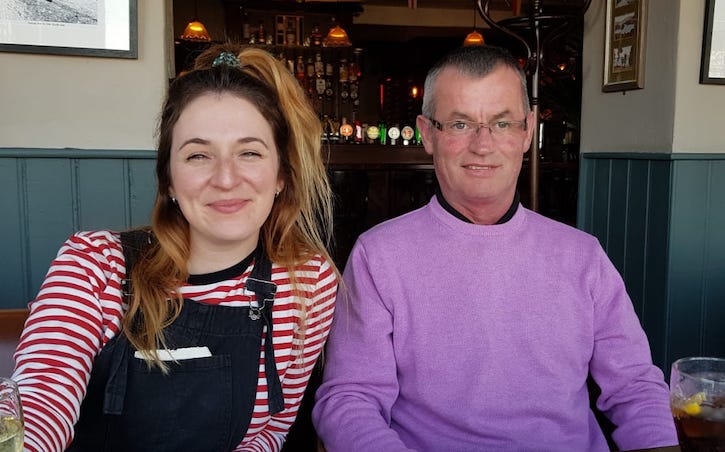 With the film currently screening at festivals and winning a BAFTA Scotland award (after this interview took place), we caught up with Hannah and Beth to find out how Bridging the Gap helped them develop their very personal documentary.

First up, can you tell us what the film is about?

Hannah: The film is a ten minute window into the ‘Groundhog Day’ lives of my aunt and uncle, ten years on from the brain injury that turned their worlds upside down. My uncle struggles to remember he is married sometimes… but he can remember jokes. And he tells them a lot. More generally, the film is about relationships and resilience.

What’s your background(s) in documentary filmmaking? 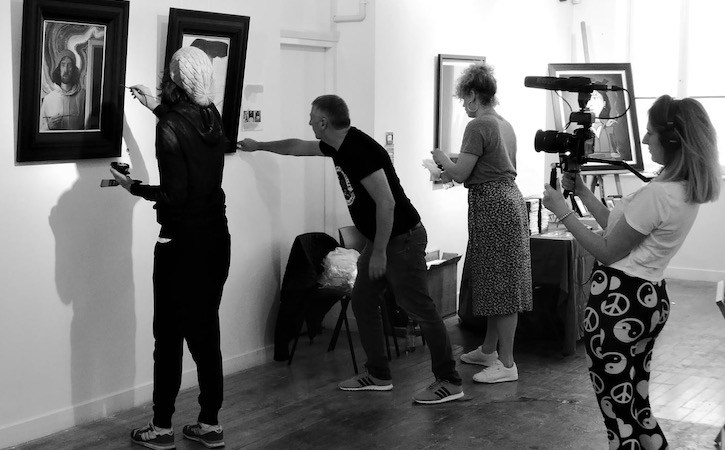 H: I was previously a journalist and a producer, so I’ve always been interested in hearing people’s stories and telling them creatively, but I only plucked up the courage to try my hand at directing in my late twenties. I left my job and spent all of my savings on a six week documentary course at New York Film Academy; that got me totally hooked so I decided to take out two loans and go back to education full time to study a Masters in Documentary Directing, which I completed at Goldsmiths University of London. My graduation film We Are All Here went on to win quite a few awards and was commissioned by BBC (and televised under its new title Lumo: Too Young To Die); so this gave me a wee bit of confidence to apply to Bridging the Gap with my next film project. I’m still paying off those loans and will be for years to come, but I have no regrets.

B: Quite new to it really. I’ve been running a production company called Forest of Black for many years, making commercials and music videos. I’ve made quite a bit of promotional style documentary, but creative documentary is something different. I have a couple of feature documentary projects in development and was on the Eurodoc programme for European creative documentary producers last year, so I am inching my way forward to producing my first creative feature doc – but these projects are increasingly tough to finance and take a very long time! Producing the BBC version of Hannah’s film We Are All Here and That Joke Isn’t Funny Anymore are both Hannah and I’s first broadcast and commissioned short documentary projects, so we’ve been learning together!

H: I’d been aware of Bridging the Gap for a number of years and had tried (unsuccessfully) to apply before. I now realise that my previous applications missed the mark, either because they had no sense of story or I hadn’t secured access to my characters. These are things I learned are pretty fundamental along the way. I had always been really interested in making this film about my aunt and uncle, but I knew the idea needed work, and Bridging the Gap seemed like the perfect opportunity to develop it and give it the best chance of being seen.

B: I’ve been aware of Bridging the Gap for many years and known lots of filmmakers who have made films through the scheme. I’ve always wanted to produce a BTG film but timing has never been quite right. I also made an application with another director that wasn’t successful. After working with Hannah on the BBC version of her grad film it made a lot of sense for us to apply to the BTG together. That Joke Isn’t Funny Anymore had such a great elevator/one line pitch right from the very start, and Hannah’s research footage with her aunt and uncle already showed they would make great characters. It felt like a great fit for BTG. Producers are not involved in the development sessions, so Hannah had to go through all of that herself, which isn’t easy but is really an essential part of figuring out what your film is. 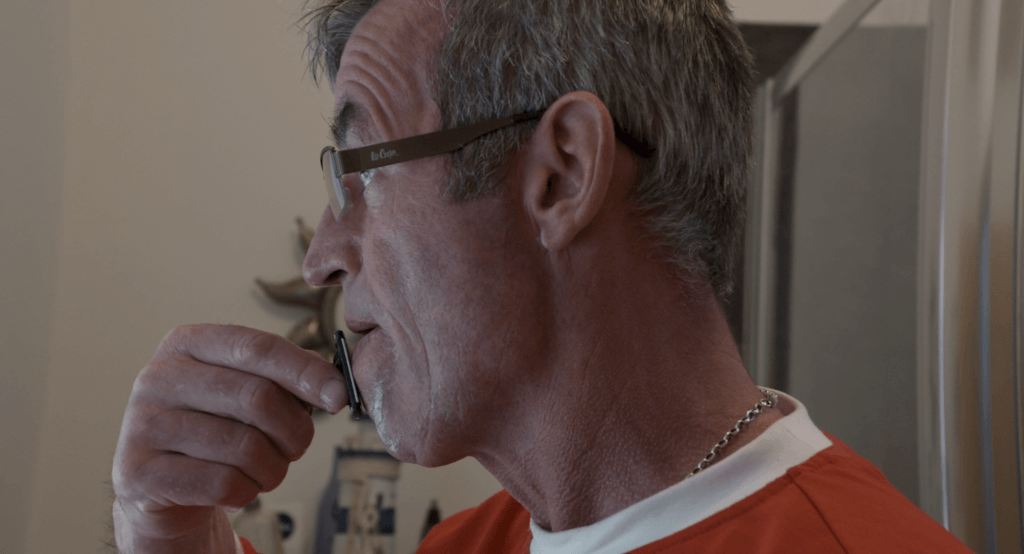 How did the proposal change during the development process?

H: It changed a lot, and often. Development is a real learning curve and makes you question every decision, which I found particularly difficult because of the personal nature of my project. But I learned so much from the process, including when to trust my instinct. You might receive a bit of feedback and think ‘No way am I doing that’ – and then at least you know you feel strongly about something and want to fight for keeping it in the film. But you also need to be willing to listen and let go when something isn’t working.

H: Filming with my aunt and uncle was really interesting for me because I felt like they both opened up to the camera and used it as a confidante at times; perhaps my presence provided a space for conversations that they’ve stopped having with each other long ago. Editing was extremely tough; I think I underestimated how difficult it would be to make a short film about such a serious subject, especially because it’s my family and I feel a sense of duty to do them justice.

B: Hannah did the whole shoot on her own which was tough, but given her relationship with the characters and how much she needed just to embed into their lives, I think this was the best way to make the film. Yes, the edit! To reiterate what Hannah says, it was tough. It was a surprise to both of us how long it took to ‘find’ the film. Really it was the very last edit, and beyond when we were meant to deliver before we felt we had found the right shape. Even then we were not totally sure. It’s really important during post to consult lots of people that you trust and get their feedback. But there also has to be a point where you just make a decision and follow that. The film could go in many different ways, but you have to settle on one and make the best version of that film that you can.

What’s it been like seeing the reaction from audiences to the film?

H: It’s been really lovely. People seem to warm to my aunt and uncle as I hoped they would; and to relate to the film on a personal level, even if they haven’t experienced brain injury. Relationships are difficult.

B: It’s not been screened publicly much yet, so there is lots more to come I hope. Both Hannah and I have been nicely surprised at how well the film is being received by programmers, it’s playing at some really high profile festivals. I guess it is quite a programmable film, it’s about a serious subject matter, something quite strange in a way, but also it’s really just about relationships and love which everyone can relate to. And it’s funny, which can be a relief in a collection of short documentaries which can often be quite tough going to watch due to difficult subject matter.

What does it mean to you to be nominated for a BAFTA Scotland award?

H: I still can’t really believe that’s true. I struggle with self-belief so it certainly helps with that. I’m completely honoured, and very excited.

B: It’s great of course! I like to think I don’t worry too much about awards and care more that an audience enjoys a film, but of course it’s nice to have official recognition and also lovely that lots of friends and colleagues have got in touch to congratulate us. It hopefully means a wider audience for the film too and will be helpful for our profile in trying to finance the next project.

H: Do it! It’s an incredible opportunity to learn from experienced filmmakers, grow your practice and fund your film project. The best bit for me is the distribution; SDI submit your finished films to festivals around the world which can be a really expensive process for independent filmmakers. It’s so exciting to show your work to international audiences.

B: Yes, absolutely go for it. It’s of course possible now to make a documentary on your own steam since the kit and software are fairly accessible for lots of people. But the value of input at development stage for your documentary idea is huge. Development can be difficult and painful, but it really helps you to analyse your project properly, why you want to make it, what you want to say with it, how an audience might perceive it, this stuff is so important, particularly with documentary. And as Hannah says, SDI’s distribution is amazing once your film is complete. They are really respected and they put a huge amount of work into getting your film into festivals which all helps towards securing the next commission. 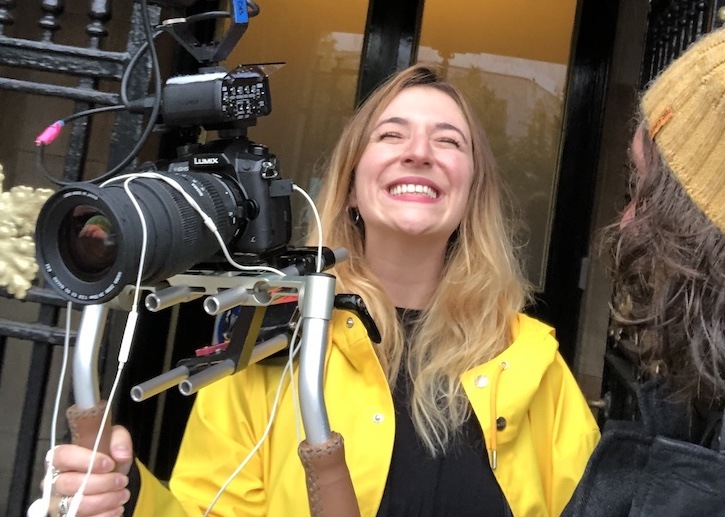 What’s next for you both?

H: I’m fortunate enough to be taking That Joke Isn’t Funny Anymore to some really cool film festivals including DOC NYC and Cucalorus in North Carolina, and then I’m attending IDFA Academy at the end of November, supported by Creative Scotland. Beth and I are working on a documentary about a Glasgow artist and I have a few other ideas in development. The cogs are turning!

B: Hannah is developing a new documentary project which I’ll be producing and I have two feature docs in development that I hope will be financed next year so we can move into production. As well as the day-to-day of running my production company, producing, making commercials and music video, I’m co-producing a short narrative film funded by SFTN which shoots in December and will be a lot of fun to make. I’m also part of this year’s SFTN run Creative Producers course which is a really great programme to develop producers, helping us figure out what kind of producers we want to be and how to support the development process effectively. I’m a big advocate for labs and programmes like this. It’s otherwise quite a lonely road trying to get films made as a director or producer, so these kind of peer networks are a huge support and a kind of group therapy!

To find out about booking a screening of That Joke Isn’t Funny More, email alexandra@scotdoc.com.